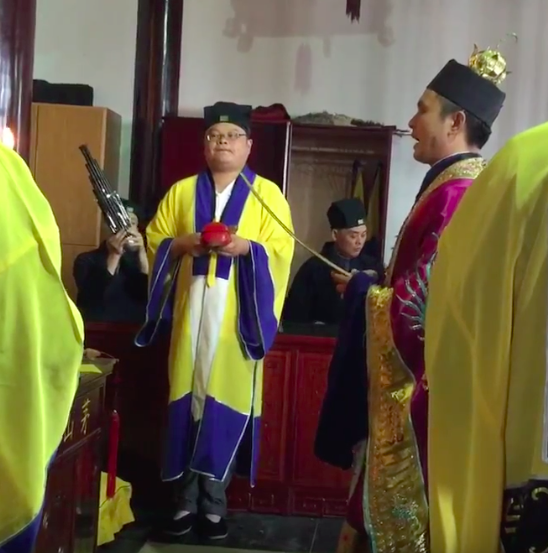 My name is Leta Herman, and I’m really excited to launch this new site about the 13 Ghost Points. I’ve been in practice for over 15 years and have worked extensively with the Ghost Points for the past 10 years.

The Ghost Points in my opinion are one of the most amazing aspects I’ve Chinese Medicine that I’ve ever worked with. I have seen them transform hundreds of people’s lives. So after working with them day in and day out, I decided to launch a Web site to help inform people about the Ghost Points and what they can do to help create freedom in people’s lives.

So what are the 13 Ghost Points?

Actually there are more than 13 Ghost Points. There are twenty total.

Working with the Ghost Points in the way that Sun Si-Miao intended is not like doing standard Chinese Medicine, where you stimulate an acu-point with a needle or your fingers to create change in a person’s energy or qi. The Ghost Points work on a deeper level. In fact, the technique used for the treatment is a vibrating technique. For example, with a needle, the practitioner would insert the needle and vigorously vibrate it to stir up or break up old patterns.

I like to say that using the Ghost Points breaks up cellular patterns. For example, if someone has PTSD, they have an involuntary response to certain stimuli. They can’t help it. Every time something specific happens, they have a specific reaction that has nothing to do with the current events, but is in response to the memory of some past trauma. The Ghost Points get in at that level and shake up this habit of living to interrupt that pattern.

Sun Si-Miao put together a set of points, that in my humble opinion, were selected because they cover every aspect of how we interact with the world. So each point focuses on some aspect of our lives where the past could have “hooked” into us. If you are “hooked” it means you are haunted by the past. The character for Ghost or “Gui” in Chinese has a hook in it. So a ghost is anything that hooks you, like a fish caught on a hook. You can wriggle all you want, but it’s very hard to get free.

The way Sun Si-Miao describes his 13 Ghost Point treatment is as an Alchemical treatment. Alchemical Chinese Medicine is ritualistic. I recently had the good fortune to witness a ceremony of this type in China on Mao Shan, a Celestial Master mountain. The Celestial Master performed a “blessing” ritual. This included other monks playing music and chanting. According to Jeffrey Yuen, an 88th Generation Daoist priest of the Jade Purity tradition, it is likely that in Sun Si-Miao’s time, the 13 Ghost Points treatment was performed in a similar way, ritualistically with music as a key component. 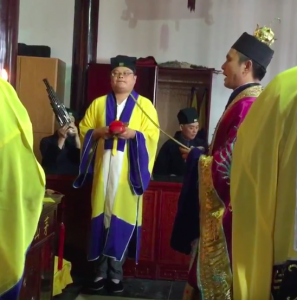 Celestial Master Ceremony on Mao Shan in China. The use of music in this ceremony is similar to how Alchemical Treatments were done in ancient times.

For the past 10 years, I’ve been using music as a key component in 13 Ghost Point treatments. In order to simulate the experience of having improvisational music played during the treatment, I started using an iPod with shuffled music. Today I have over 20,000 songs that I shuffle randomly with every genre of music.

Music itself is vibrational in nature. The 13 Ghost Points work on a vibrational level to break up cellular and emotional patterns. The music itself is part of the healing. In addition, the emotional component of having music played during the session acts as a catalyst to stirring up old stuck emotions and releasing these patterns. For this reason, I use popular music of all genres and allow what I love to call the person’s “Divine DJ” to pick the music. The randomness of the music becomes amazingly poignant and almost impossibly synchronistic to many people’s complete astonishment.

I always use the example of the women that came to me many years ago, grieving the loss of a second baby. The question she was asking her destiny was, “Should I have another child?” During the treatment, many amazing things happened and she felt quite a shift. But towards the end of the treatment, an amazing song suddenly came on the shuffled iPod mix. It was a children’s song, which I have very few of on my iPod. The lyrics were: “Mommy and Daddy and Baby make three. Three is a magic number.” We looked at each other in amazement. She said, “Do you think that’s the answer to my question?” I said I didn’t know, but it’s an interesting thing to think about.

The next day she came back for her follow-up treatment. I had a different iPod in that room, but we had a little more work to do on the treatment, so I started a new iPod shuffle mix. To our amazement, the first song that came up (out of 20,000 songs!) was that very song again. We were shocked and amazed of course. Needless to say she never tried having another child. The question had undeniably been answered for her.

Whether there is a Divine DJ or not is not the point. The point is the music and sometimes the lyrics stimulate an emotional dialogue within the person that instigates transformation and change. The many miracles of amazing iPod song selection that I see are not nearly as significant as the miracles of change in the people who experience this work.

The changes I see in clients are so numerous in type. But to give you an idea, here are some cases I often talk about to clients.

The list goes on and on. As you can see, it’s different for every person. But in all cases, they are being held back in their lives by deeply held beliefs and patterns of thinking. They are essentially trying to prevent something in the past from recurring, but instead are limiting the actual living of their lives!

In each case, different Ghost Points in the treatment were more important than other points. One person might have the most significant changes during the “Ghost Convincing” point, which is a point about not trusting yourself and being easily convinced by others. Or perhaps a different person might struggle the most with Ghost Hidden, which is about guilt and shame–a point that is especially important for victims of sexual abuse. And many people have several points that are “active” in their treatment.

The points also progress from how we interact with the outside world (the first set of points) to deeper and deeper issues, until the last point, which is called Ghost Seal (like the Seal or wax stamp of antiquity that identified the sender of a letter), which is about our core identity.

In the end, working with the Ghost Points is a transformational experience for both practitioner and client because the change that happens inside the treatment room can only happen as the practitioner travels side-by-side with the client through that door of change. For this reason, I believe it’s important to learn the Ghost Points in a clinical setting with someone familiar with them before attempting to do them yourself. Initially when you do the Ghost Points as a practitioner, they can affect you on a very deep level and even be difficult to complete in one session. For this reason many people only do three Ghost Points at a time in a session. I sometimes choose to do them this way for specific people, but it’s a very different treatment when done in this way.

To do the 13 Ghost Points in one session, you need to allow enough time. 4-6 hours is a wonderful time away from life to experience a shift or transformation.

For more information about studying the Ghost Points at my clinic, see http://thirteenghostpoints.com/thirteen-ghost-points-workshop/.